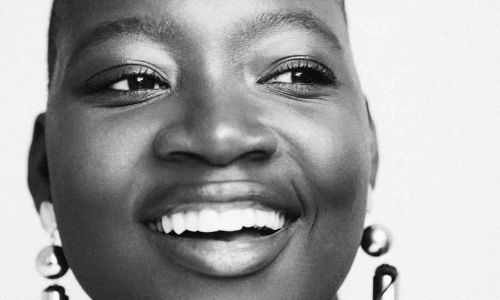 Mama Cax (Cacsmy Brutus) is a Haitian born model , advocate, blogger and motivational speaker, based in New York who holds a BA and and MA in international studies.  At 28 these achievements alone are impressive by anyone’s standards, and her life at first glance, seems to be complete.

But it is not just her stellar professional career that sees this stunning young woman stand apart from others, Cax as she likes to be called, has faced unimaginable adversity in her 28 years. Diagnosed with osteosarcoma which had metastasised to her lungs, and at the tender age of 14, the fight of her life began.

Cax early life was near perfect, in the idealic surrounds of her home in Haiti. Then in a blink of an eye, this all changed when constant pain in her hip was, after many visits to her doctor, finally diagnosed as osteosarcoma. Like most sarcoma patients, the diagnosis simply marked the beginning of a journey that most people would struggle to comprehend.

An intensive neoadjuvant chemotherapy protocol for twelve months was followed by an invasive twelve hour hip replacement to remove the tumour from the bone, together with a metal implant, which Cax’ body rejected, proved to be unsuccessful. The result was an amputation of her right leg, together with half of her pelvic bone. Keeping in mind all along Cax was the tender age of 16. When I was 16 the biggest issue I faced was what to wear, or how to avoid homework, and I am sure I am not alone.

The toll was indescribable and understandably, severe body image issues began to manifest, as the standard prosthesis that was fitted did not look real, and the reality of the magnitude of surgery set in. This is something rarely considered by those on the outside looking in. If you have your life, then to the outside world – you are deemed one of the fortunate ones. For those living this nightmare, it is yet another bitter blow.

Cax sourced an online community who identified with her concerns, she found Alleles, a company who made “fashionable, beautiful prosthetic covers”, and the shift in her self confidence began. During this time, Cax began her now highly successful Instagram account ‘Mama Cax’ which currently has 141,000 followers, to share her journey of ‘self love’.

By living by her mantra, she was able to “encourage others to feel less insecure and more empowered in theirs.” Adding, “I no longer feel disgusted looking at my scars. I now see them for what they are: proof that I survived, that I’m still here, and against all odds, won a vicious battle with cancer, and that’s nothing to be ashamed of.”

Cax, through sheer courage, determination and resolve, has turned the unthinkable, into a vehicle in which she guides and inspires others that walk behind her. She is a highly successful blogger, who is a disability advocate who has earned the right through her experience, to speak about positive body image.

For those of us who have lived this nightmare that is sarcoma, either as a patient or the loved one of a patient, we thank this inspiring, beautiful young woman for all she has done and is doing for those without a voice.