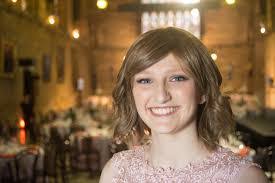 It is with profound sadness, we have learned of the passing of Gabriella Wehbe, a courageous, and inspiring young lady who staged a fearless and hard -fought battle with rhabdomyosarcoma. Gabby and Cooper were the same age, and were both treated by the outstanding sarcoma team at Chris O’Brien Lifehouse, and this is how they met.

As a family, we were in awe of Gabby’s strength, and humility and the grace in which she took life in her stride, making every moment count.  We will never forget the 15th November, 2016, at Sydney University Great Hall, when she and Cooper, despite their personal adversities, delivered speeches outlining their respective sarcoma journeys.  Together these bright shining lights, contributed to the outstanding amount raised that evening, of over $500,000, which benefitted the Comprehensive Sarcoma Centre at Chris O’Brien Lifehouse.

Gabby’s speech reminded the guests that night, that no matter how tough the day is, it is nothing in comparison to what young sarcoma patients face hourly, and most choose to simply get on with the job at hand.  Rarely a day passes when I do not recall Gabby’s or Cooper’s words from that evening, which are etched in my memory forever.

Suffice to say, Gabby would never quite know or understand the joy, the hope and the inspiration she brought to so many.  She will remain a beacon of light in our lives which are enriched as a result of the inspiration you provided so many

Our hearts tonight break for the Wehbe family, and we join with all of those whose lives Gabby touched in sending love, light and strength in abundance to her wonderful family.  We understand all too well, your unfathomable loss, and we vow to continue our work in fond memory of the bright shining stars, who have touched our lives forever.

“My dream is for urgent and much needed change to assist sarcoma patients globally. The inception of my Foundation was and is, for the purpose of instigating this change, and to use my significant sporting affiliations, and my passion for journalism to raise grass level awareness, thus stimulating critical funding.

Put simply, my role now is to be the face of the Cooper Rice-Brading Foundation, and the human face of sarcoma, and to ensure my story is told.  No matter how difficult my journey,  I need to convey to others the personal side of this diagnosis, and the need for the critical change required to significantly alter the trajectory for  sarcoma patients everywhere.”

Friday the 26th February, 2016, marked a very dark day in our lives.  It was the day Cooper underwent a routine MRI to diagnose a suspected tear in his bicep, and after two hours wedged in an MRI machine, anxious, alone and bewildered at the time the process was taking, he was to eventually find his life had irreversibly changed.  A routine MRI had become what was to be a death sentence for our precious son and brother.

Osteosarcoma is an insidious cancer by any standards, and is now classed with other sarcomas, among those childhood/young adult cancers with the worst survival outcomes.  Despite this, it has by and large, been overlooked, and there is statistical evidence to suggest diagnoses are rising, with a  documented 40% increase from the previous decade. (Professor David Thomas, Director of The Kinghorn Cancer Centre and Head of the Cancer Division of the Garvan Institute in NSW.)

It is then perplexing to say the least, this cancer has not received the attention it so desperately needs, together with funding that has been missing from the Australian Government cancer budget.  Instead, philanthropy is responsible for the vast majority of  funding, and most often comes from the loved ones and their friends, of those children and young adults who have tragically lost their lives.

On average, seventeen life years per patient are lost due to sarcomas which is an impact three times greater than bowel, lung or breast cancer.  The cost to the community through the health system of bone and connective tissue tumours was $29,593 in 2003, (Professor David Thomas, Director of The Kinghorn Cancer Centre and Head of the Cancer Division of the Garvan Institute in NSW.), more than three times that of colorectal and breast cancer combined, and yet there has been no marked improvement in life expectancy, nor treatment options. Current figures are not available, and in all likelihood would show a marked upward trend since 2003.

The needless loss of life, the sheer emotional hell experienced by patients, and the lack of mainstream treatment options, which may accompany a sarcoma diagnosis, are no longer acceptable, and never were.