As per Rebecca’s (nutritionist’s) suggestions last week, I had a bottle of Gatorade at the end of the pool this week along with my water to help keep my energy/interest levels up during the swim. This would also hopefully help with the run immediately after. I also extended the swim distances for this week.

Whilst I didn’t swim as efficiently as I have previously, today was a good indication that my body is able to keep swimming for longer distances. I broke the mileage up into 3 x 500m swims, followed by a final 1km effort and felt fine to keep going after each of the sets which was extremely positive. The 3.8km (race distance) isn’t too far away with 20 weeks training still to go.

The run was my easy one for the week. My legs seems particularly sore from yesterday’s weights session, likely in conjunction with my big Sunday run. Energy levels were steady throughout, so I was happy with the Gatorade/water/banana consumption beforehand and during this day’s effort.

Ended up doing this in reverse order (Run first, into the bike) which made for a noticeably tougher workout. Ran really hard during the run and made some great time, but coming onto the bike it took about 25 or so minutes to finally get settled.

Nutrition-wise, I destroyed a banana after the run and took a water and Gatorade on the bike with me to sip on throughout. 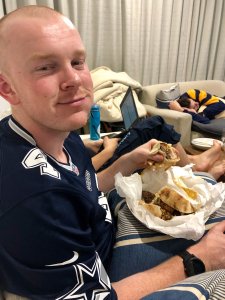 Hit a wall early with the swim. Really need to get into a squad. Was swimming well for the brief time I swam but just felt like I couldn’t be bothered.

Once again, took me ages for my legs to get suited on the indoor bike. They came to the party at about the 30 mins and rode well for the remaining hour.

Nice solid, steady run to end off the week. Ended up going pretty fast but feeling good throughout. Following the run my watch was telling me my V02 max had jumped up a bit (up from 52 to 53). Not sure what that means but solid bit of feedback and I definitely feel faster during each passing run.

Followed that run up with a gym session which was tough but struggled through it. The calf raises are killing me, they seem to be in a constant state of pain at the moment.

Didn’t go as long as I wanted. Ideally I want to start hitting 4 hours week in, week out going forward, but woke up too late today and had a meeting with a cycling store at 11am to get to. As it turned out, the cycling shop had to cancel as I was on my way over disappointingly.

I’m looking forward to getting out the longer and longer times on the bike, I’m enjoying it more now.

Ran for nearly exactly 2 hours, doing 24km this time, so getting up there distance-wise. This track had far less red lights which often disrupts my runs which was great. Still hitting that same 5mins/km pace I’ve been hitting the previous weekends which I was really happy about. Again had issues with getting fluids on board, with the running track this time taking me down near the airport which offered no taps or bubblers during the key 40-80min period of the run. Took two gu’s which really helped, but I think once I’m getting the necessary fluids on board during the run as well, I’ll start hitting some great times.

Next week I’ll look to hit the 27km mark, before backing off the following week as a rest week. Keen for that!

20 weeks down, 20 weeks until game day! I feel like on the whole, my rate of improvement is going at an exponential rate itself. Running in particular, I’m really happy with the progress I’ve made. The training sessions are only going to get longer but so far so good. I’m not injured, I’m happy with the exercise and I’m still able to keep up with everything at work. Let’s keep it going!