In light of previous revelations regarding my “weak trunk”, the strength sessions two times a week will mainly focus on legs and controlling my core during various movements. I’m feeling more solid already.

I also met with nutritionist Rebecca Hay during my lunch break to discuss plans to sort out my diet. Whilst we will need to fine tune it once I’ve locked in a new plan with my conditioning coach (next week). The general improvement points revolved around more rapid consumption of proteins and carbs immediately after a session, as well as consuming a small breakfast before my morning workouts. She also gave me a few meal prep ideas to make for work lunches which will certainly replace the chicken and rice combo I’ve had going the past few weeks…

The plan was for the above session. However following a rubbish day at work I stopped early in the swim (15mins) with my mind all over the place and not focussed on the new technique movements I’d been working on. I genuinely stopped mid-lap and just had no motivation to keep pushing through which was extremely frustrating.

Smashed out a run/sprint back home through the rain which helped bury some of the frustrations. Ran some solid time for the nearly 5km run (4:10min/km) but still disappointed I couldn’t get through the swimming session.

Massive session, took ages. Started with weights just because I saw a rare moment that the squat rack wasn’t occupied by some massive Bulgarian dude. Have found that chucking small plates under my heels during the squats has massively increased my range of motion which will no doubt be beneficial.

Rode hard in Z3 for the majority of the time with 4 intervals of 1min all out thrown in to test myself. Was definitely sweating more than normal today which was gross. Quickly rotated out of the indoor bike and on to the treadmill for a solid run at 3% gradient. Was also sitting in the Z3 lactate threshold throughout. Felt great afterwards and tried to incorporate the nutritionist’s advice by having a protein smoothie thing (YoPro, yes I’m open for sponsorship) immediately after while waiting on the bus. Vanilla is always the best flavour of anything…

Completed a running analysis with Robert Mullard. Similar to the swim, great to get some personalised advice as to what I can improve upon. He gave me a few drills to work on and will touch base with my strength coach to try and incorporate some routines in there to help with my running. The main takeaways for my running technique included:

Really put in a good swim session to make up for my rubbish one on Tuesday. Felt great throughout and my watch’s efficiency measure (called SWOLF or something funny like that) has recorded notable improvements since the lesson a couple a weeks ago which is awesome. The lower the SWOLF, the more efficient the stroke (i.e. if you take less strokes per lap, but with a really fast time, you’ll have a lower SWOLF score thingy because your swimming action is more efficient).

Following the debacle of Sunday’s “dooring” by the mother of two in Willoughby, I slumped back to the safety of the Iron Bay loop. It was bloody freezing but the arm-warmers from Tyron’s collection were sufficient to get me through it.

Ripped around Pyrmont and Wentworth Park for a couple of loops. The main objective was to work on the running technique tips from yesterday’s session. My pace on the run was significantly better for this run, with my heart rate still staying at a solid level (averaged 155bpm) throughout.

Writing this now on Saturday, I’ve also definitely noticed less soreness in my back after the run, which is often a slight issue just due to the nature of running on concrete. Happy with the changes I made thus far

Used the Garmin “routes” app for the first time to give me a route to cycle up near Palm Beach. I input the start/finish point, how far I want to go (50km) and which direction I want to travel (any) and it spits out a cycle-able route which I can then read off on my watch as I’m cycling.

This was a ripper ride and far better than my Willoughby experience last week. The drivers up and around this area also seemed less pissed off with me than those around Northbridge which made cycling on the main road more enjoyable. The hills up and around the back of Bilgola were nasty. I don’t really know what elevations and hills are considered relatively “difficult” in the cycling world but I’m pretty sure that this was as difficult (and probably more difficult) that the hills those Tour de France chumps do.

All in all, no major crashes and heavy sweating = good workout 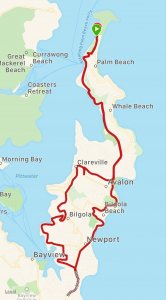 Went on a long run up and around the hills near Mackerel Beach. Tried to really push myself throughout whilst incorporating the techniques from the analysis. Found that I ran at a great tempo, with a dip in the pace during a big section of walking trail running, where I was running around rocks and plants. Looked a great area for a cycle if I could be bothered driving up the coast to get to the start point. 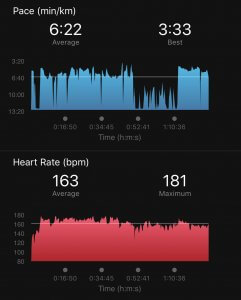 23 weeks until game day! This week I’ve got a conditioning meeting with endurance specialist Hamish Gorman to change up the workouts I’ve been doing for the next couple of months. Thus far I’ve mainly been focussing on longer, endurance-based sessions, trying to stay in that Z2 heart rate and essentially just improve my ability to use my legs for a long time. I suspect Hamish will look to introduce a lot more interval-based sessions to more effectively boost my fitness levels, whilst using the weekends to fit in these long, steadier heart rate sessions to ensure I’m still ticking that box. Hopefully I can share this new program on the blog next week for y’all to take a look at.