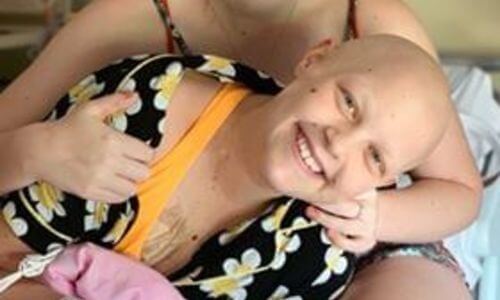 I remember exactly where I was,  the first time I watched a television interview with 13 year old Molly Croft . I was wading through a government proposal for sarcoma funding which was to be submitted to Minister for Health, the Hon Greg Hunt, and I was experiencing severe writers block.  I took a break, and turned the television on, to find a captivating interview with a gorgeous young lady, who had been raising funds for Ronald McDonald House (RMH).  I admit to shedding many tears as I watched this courageous little soul being interviewed like a seasoned professional.

The interview had already begun, and it seemed I had missed the part of the story which covered the illness that brought Molly to hospital, and her family to RMH.  It wasn’t at all important int he overall scheme of things, however as I watched this courageous and vibrant little girl, with the most infectious smile, a strange feeling came over me.  As the mother of a sarcoma patient, I now find myself with an awareness of others, and I know it did not exist prior to Cooper’s diagnosis.  I had a nagging feeling this innocent little girl, was yet another casualty of this horrendous cancer.  I was not the only one, many people saw that interview and sent me emails and FaceBook messages, and each of them were as concerned as I was.

It was after donating to her outstanding fundraiser,  my worst fears were confirmed.  This little girl had been diagnosed with osteosarcoma.   Needless to say, my writers block was swiftly removed, and a renewed sense of purpose took its place.

Fast forward several weeks, I had the great privilege of meeting Molly and her mum Ange after Molly’s most  recent surgery last week.  I found myself pondering life, and acknowledging that whilst we are all blessed in one way or another, there are many cruel twists and turns – a 13 year old diagnosed with one of the cruelest childhood cancers is something that despite my extensive experience in this area, I struggle with greatly.

Molly has one very crucial positive on her side during this devastating process, the support of the most cohesive, and loving of families.  Big sister Maddi, dad John and mum Ange, who never leaves Molly’s side.  This has not been easy, as the family live in Dubbo, over 300kms from Sydney, and due to her body’s  rejection of her previous prosthesis, dear little Molly’s leg could not bend, and flying to and from Sydney, was out of the question.

At this point, it is also important to recognise the Dubbo community who have wrapped their arms around this family, and in spades, showed them, and continue to show the family, the love and the practical support they so need.

Molly yesterday received news of yet another setback, as she learned that she has developed a staph infection whilst in hospital, and will require another week receiving intravenous antibiotics. Every day in hospital marks another day closer to Christmas Day, a time when families traditionally spend time together, and celebrate the year that was. A happy and magical time of the year.

Molly’s story is a timely reminder to all of us, that for many, this time of the year can and does magnify the pain and suffering of many.  It is also a time when we can look to make a difference, small or large in the lives of those less fortunate.  It doesn’t have to be monetary – random acts of kindness mean the world when you are at your lowest ebb.

Molly, I am rarely lost for words, but I am finding it difficult to find the words to articulate my admiration for you and your beautiful family. You each remind us that when we think we are having a bad day ….we aren’t.

I would urge you to read mum Ange’s account of the past year, be inspired, and when you have finished, hug your child.  Hug your loved one and remember “…there but for the grace of God go I “- John Bradford.

When reading Cooper’s journey there are so many parts that seem so similar to our Molly’s journey. From diagnosis, to treatment, to operations and all the other that goes hand in hand with this hideous disease osteosarcoma. But as a mother, nothing seems more similar than the way in which these kids have carried themselves and walked the journey. Moll like I read of Cooper, has held her head high and in fact said from day one “there must be a reason I have to go through this and we will, one step at a time, there is no other option anyway”. And that is what she has done.

Molly was your ordinary sporty, happy go lucky 11-year-old girl. Moll followed in her big sister’s footsteps and played rep netball, hockey and basketball for our home town Dubbo. She was her year six school leader and was lucky enough to have played in the winning state school basketball side only a few weeks before being diagnosed. She played state age netball here in Sydney the week before being diagnosed. Sport was always a big part of our girl’s lives. It’s what they did and it was who they were.

She had had a little niggle in her calve when she played in the Polding basketball side – but nothing to serious or though we thought. And when she came to Sydney to play netball – she played about 18 games over the 3 days. Her leg was sore – her shin was hurting, we assumed shin splints – we strapped it and she played on. By the third day we knew she wasn’t right – but her team needed her and she played on.

On our return to Dubbo we took her that week to the local doctor, got an MRI and by the end of the week and on Molly’s 12 birthday we arrived at the Sydney Children’s Hospital at Westmead to see a doctor for a review. On this day, on her birthday we were told that we were facing something serious – that Moll would go straight into hospital – and within the week Molly was diagnosed with high grade osteosarcoma –  Chemo would be starting straight away and that in approximately 10 weeks Molly would lose most of her tibia, her knee and part of her femur. But before this Molly would have 6 rounds over the next 10 weeks of some of the worst chemo any adult or child can have.

Our heads were spinning – how could this be happening to our girl – to our family. But it can in fact happen to any family.

Molly call’s Professor Stewart Kellie (her oncologist) and Doctor Richard Boyle (her leg surgeon) her two supermen. We all agree with her – they are amazing human beings.

Moll worked out early in this journey that the best way to get through this was by looking for a reason to smile every day – even on Molls worst – and although some days were worse than other’s she didn’t miss a day where she didn’t give thanks for something that had made her or us smile. From the other children on a similar journey that she became lifelong friends with, to the starlight captains, clown doctors, or the amazing caring nursing staff or another hundred things that happen within those hospital walls – they always found a reason to smile.

After Molly’s first round of chemo her leg broke right through the tumour – and from then until surgery Molly was in a full leg cast – and every couple of weeks or so the cast had to be taken off and redone.

Before we knew it the 13 weeks were gone – Moll had learnt to rock having no hair, we had mastered sponge baths – she had had her major surgery and the tumour had been removed. She now had her new leg and the scar you can see is her trophy as she will proudly tell you.

It was post-surgery, when the tumour was dissected, that we were given our first idea of how Moll was faring in this battle – and the odds were now looking to be in her favour as she was responding well to treatment and the tumour was pretty much dead.

From here Molly faced another 20 plus weeks of chemo – her body much weaker and recovering still from surgery. Chemo now had to continue to mop up the cancer in any other part of her body. We faced lots of trials, some being the worst of our lives but our girl continued to smile when possible.

Soldier on Molly did – Moll has made friends with nurses and doctors and patients in I think just about every ward in the hospital. On some of Molls darkest days we have met the infectious diseases team, ear nose and throat specialists and became well known to the orthopaedic team too.

Molly was given a piece of string at the beginning of her journey – and was told she would be given a bead for any big thing she had done during her treatment, like a round of chemo, a kidney function test or a scan or physio session – they are now over 6 metres long – and she still has more to add.

On the 9th of April 2019 Molly had her last round of chemo – her treatment, her protocol is done.

When we were running our girls all over the countryside playing sport, teaching them all the values sports teaches you, never did we think that our Molly would be calling on these attributes to help her in such a battle – but she has. Molly has faced this disease with courage, strength, honour and compassion for herself and others. She has been knocked down and she has gotten back up.

Since treatment has finished Moll has had issues with infection and we have seen our courageous girl battle through many more surgeries. In fact, she has only been back at school some 14 days since being diagnosed.

It was not so long ago, one evening when I was putting Molly to bed she said to me “Mum when I was told what I had to go through I thought I’m never going to get through this – but you know what – it hasn’t been that bad – I’ve met some amazing people I will remember forever, people that will be lifelong friends of mine, Mum it really has been ok”. And that’s who our girl is. She may no longer be the netballer or basketballer she was but these also don’t define her or make her who she is. Our Molly will tell you “I now know how loved I am and it’s a beautiful feeling. I am me and I am enough just that way I am”.

Unfortunately, there isn’t a person, child or adult that is ever diagnosed with this disease that doesn’t have to suffer through a similar journey. And it is with this in mind that we can’t thank Cooper and his foundation enough for raising awareness of Sarcoma cancers and putting it out there for further research to be done and hopefully one day finding a cure. So that no family, no one ever, has to walk the path that so many have had to in the past.

Since finishing treatment Molly has helped raise $185,000 for Ronald McDonald House Westmead and over $21,000 (in partnership with Sydney netball Giants player Amy Parmenter) for the oncology research team at The Sydney Children’s Hospital at Westmead.