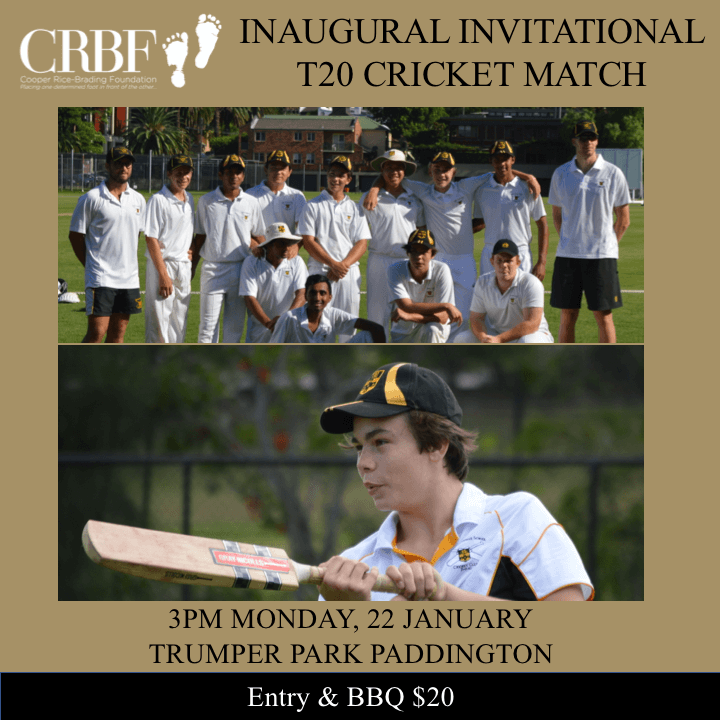 Tuesday 22nd January, 2019  saw CRBF host the second T20 Birthday Bash at Trumper Park Oval, Paddington.  This event was incepted in 2018, by Coop’s friend and representative team mate, Will Todd.  Will, together with his family, mum Robin, dad James, and brother Tommy, worked so hard once again this year, to ensure the outstanding success of the event.  We are indebted to the Todd family for their ongoing commitment to this event, together with their love and support.

The oval was prepared to perfection for the event, and we would like to thank the Trumper Park Groundsman, Guy, who painstakingly prepared the wicket.  We were privileged to be the first hirers of the newly refurbished canteen, which withstood its first big test, with flying colours.  Our thanks are extended to Kim from Woollahra Council, for assisting us with the entire ground hire process, and the Council for waiving the ground hire fee.

A sell-out crowd once again witnessed a quality game where the CRBF All Stars were very unlucky not to take the bat home this year, going down narrowly to the CRBF 1st X1.

Man of the match was Will Simpson, with runners up, Cameron McLean, and Will Mallett.  We thank each of the thirty amazing young men for giving up their day, to participate in this very special event.

Below are the match reports from Mitch Rice-Brading and Will Todd.

The second annual CRBF T20 Bash, saw the CRBF 1st XI  looking to defend their title against the CRBF All Stars. After winning the toss and electing to bowl, the CRBF XI got off to flyer, especially Robin Evans, who was literally flying as he plucked a one handed screamer at square leg. Reeling at six for not many, after Will Mallett had run through the top order, Will Simpson entered the crease, and was kindly greeted by his whipping boy Steve Salakas. Simpson went about quickly rebuilding the innings, dispatching Salakas to all parts on his way to a finely constructed 80. As the tail rallied, the All Stars were able to put 172 on the board, a very competitive total considering their start.

The CRBF XI got off to a shaky start, losing Evans in the first over, but before long Isaac Crawford and Cameron Mclean were moving along beautifully at the crease. Quick singles and twos were few and far to come by, however this was masked by the destructive boundary hitting of both boys. After Crawford fell, Baxter Holt came to the crease and maintained the rage, including one remarkable switch hit which cleared the boundary by 30 metres. The contributions of these 3 boys saw the CRBF XI cruise to victory in the 17th over, and holding on to the bat for another year.

We know Coops is smiling down on us proudly as we honour his legacy in the most appropriate manner possible.

Winning the toss, the CRBF All Stars set out to score a big total. It was all the CRBF XI early with Will Mallett and Alec Sheldon tearing up the All Stars top order. Will Lawrence and Tom Miller looked eager to get the all stars back on track before they were both dismissed just shy of 20. Will Simpson proved to be the remedy for the All Stars, and simply too good for the CRBF XI, blasting an important 80 runs. Simpson cleared the rope all around the ground and with both hands! An extremely valuable 30 from Harry Crawford led the All Stars to a final total just shy of 180.

With a big total on the board Charlie Hooke wound back the clock with a fantastic opening spell, dismissing the dangerous Robin Evans in the first over. However, a huge first wicket partnership put the CRBF XI in the box seat. The All Stars fought back with two quick wickets providing some hope. However, a fiery 40 from Baxter Holt sealed the CRBF XI’s second victory in consecutive years.

The CRBF XI again proved to be too good for the All Stars.

As with the year prior, the day was another overwhelming success, and our family are truly touched by the generosity of all those who attended.  The  atmosphere in the stands was electric, and made for a fantastic vibe both on and off the ground.  On a day every year, that is an extremely difficult one for our  family, we are so humbled by the willingness of those attending, to make it a special day.

We could not conduct an event like this without our magnificent volunteers.  I could literally write all day and I would still be unable to adequately thank these remarkable individuals:

Kate Longden, Libby Patterson, Keith Cox, Tim, Gloria & Josh Gapes, Michael Furlong, Mitchell Rice-Brading, Emma Duncan and photographer Sorabh Arya who was also responsible for erecting marquees and everything in between,  all deserve a special mention for their staying power on a very hot day.  All starting between 11am and 12 midday and there until the end of the day.  Thank you really does not seem to cover our gratitude to each of you.

Joining these remarkable individuals were brothers Oscar and Hugo Patterson with a group of young friends who I am sure would have better things to do on a very hot day, but who worked so hard to prepare the exterior.  We thank them all so very much, together with our Chairman Robert Beech Jones, who put on an apron and worked for hours on the barbecue, producing some fine cooking in the process, Luke Bennett for set up, Chris Nicol, Michael Comino, Ani Joshi, and Toby Debelak in the bar, our umpires Martin Rossleigh and James Todd,  George Foley and Alexander Magiros who kept an close eye on everything around the ground, Josh & Alison Craig together with Gillian Sloane, who greeted our guests and stamped our over 18s, and Graham Nicol on barbecue.

We also extend our thanks to Kirsten Martenssen and Nikki Yeaman for their outstanding work in selling our raffle tickets, Lilah Critchley-Isherwood and Fiona Beith for their help with food prep, and Peter Salakas and Mitch Rice-Brading for a highly entertaining four-hour stint at the microphone.

An event such as this would not be possible without our commercial partners and sponsors.  We thank the following individuals and businesses for their generosity:

Our final thanks goes to each of our supporters.  You purchased raffle tickets, tickets to the game, food and beverage, and proved to once again be the perfect group of spectators on the day.

More significantly to our family,  you once again wrapped your arms around our family on a day when we needed it most.