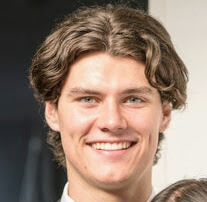 “My earliest memories of Cooper are from Year 6 at the Scot’s College. With a mutual passion for sport and an identical sense of humour, we were destined to become really good mates. Funnily enough, it wasn’t until he had left Scots and moved to Grammar that we became so close.

Cooper’s cancer diagnosis was a really confronting experience. One of my biggest concerns was whether Cooper would be able to continue playing sport because he loved it so much. However, Cooper didn’t let his condition stop him, he continued to persevere, insisting he was the best sportsman despite playing one handed. Cooper’s sporting efforts are a testament to his perseverance and resilience.

Cooper rarely discussed his cancer because he didn’t want it to impact those around him. He was so brave and selfless, a true role model. No matter how tough things seemed to be I always believed he was going to be okay because he was so positive and motivated.

I am very proud to be an Ambassador for Cooper because I want others to be inspired by his perseverance and courage, just like I am. While I’m not too sure what being an ambassador entails, I feel very safe in Tania’s hands.”