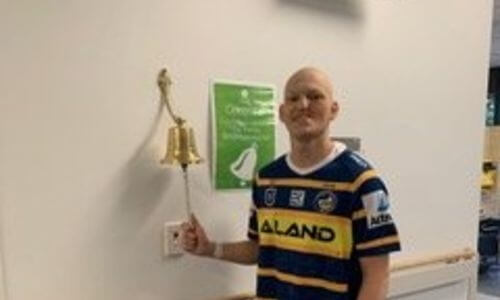 Fergus  McCulla first appeared on our radar in late 2018, due to his raw and factual accounts of his current cancer treatments, which he posted on his Instagram page ‘The real face of cancer”…

We connected via social media, until finally meeting whilst he was undergoing treatment at the Chris O’Brien Lifehouse.

The thing that stuck in my mind after meeting Fergus for the first time, was his bright and sunny demeanour, and a beautiful smile that was ever present, despite what he is forced to relive for a second time.  I have since come to realise the entire family are the same.  Mum Jane, dad Norman, and Fergus’ beautiful sister Anna, have been by his side every step of the way, not once but twice.

Fergus was diagnosed at the age of 7 with Non-Hodgkins Lymphoma in the bowel. He had been experiencing intense abdominal cramping, and the discovery of NHL was only made after having his appendix removed, and a biopsy of my bowel returning as malignant. This is very rare for a child to experience.

After surgery and chemotherapy, and then receiving the all clear, Fergus went on to live a very normal life post-cancer, but he did understandably suffer mental trauma that had lingered from his sickness as a child, and an underlying worry when he became ill, that his mind would race to the worst conclusions if he experienced any pain in his body.

Fergus had spent several years in bands touring around Australia, and after realising his  lifestyle as a musician wouldn’t support him long-term, he was given the opportunity to work in the family publishing business at the age of 25.  He moved into his own place in 2017, and was loving his career and life was moving along perfectly.

Things changed in the blink of an eye, some 21 years after his first cancer diagnosis, in July of 2018.  Fergus had a growth on his gum, above top left incisor – which he had been monitoring for about a month. He decided to have it looked at, and was prescribed antibiotics to stop infection – which had no effect. After visiting a second GP, being prescribed the same antibiotics and having no results, he then visited his local dentist for root canal – which was unsuccessful as the nerves in his teeth were still very much alive.  He was then referred to a specialist, who took a biopsy from his gum, which came back as benign. As his  situation was unusual, and showing no definitive answers, together with his history of cancer, he was then referred to another specialist.

Fergus’ results from a second, more invasive biopsy came back, and he was diagnosed with Rhabdomyosarcoma of the maxilla, a rare and very aggressive form of cancer.  As the tumour was in a favourable site, the best option was to immediately resect his upper jaw – gaining a clear margin around the tumour. There was however,  a chance his body may have immunised itself to the drugs he had during chemotherapy earlier in life, and they would have no effect.

Fergus is now  part way through a fibula-flap reconstruction.  Initially his maxilla, along with the tumour were removed, and replaced with a graft taken from his left thigh. This took three surgeries before clear margins were gained around the site of the tumour and the graft took successfully.  He will require dental implants toward the end of this year, then in 2020 he will be doing reconstructive surgery – where his fibula will be taken for a bone graft to recreate his upper left jaw.

Earlier this year Fergus completed 30 sessions of radiotherapy, and is just about to finish a 6 month course of chemotherapy.  Radiation for this cancer requires the patient to wear a mask/plastic mould,  most prefer sedation, as it is terrifying.  and due to the close proximity to the brain, the patient is required to remain very still, under the plastic mould.  Sessions last between 15 and 30 mins each time.

Fergus was very well acquainted with  already the effects, and challenges of chemotherapy, however extensive surgery to the mouth and jaw, has required a lot of adjustment.    No longer being able to eat without a knife and fork, and having to consider things like the texture of food which can be so painful, the size of food, and temperature.  Things that we all take for granted, have now become daily struggles.

Radiation therapy was very difficult for Fergus due to the effects on the head and neck area, which become  extremely painful towards the end of treatment, and the fatigue is overwhelming. The basic process of taking a sip of water could not be done without intense pain, much less eating food or speaking.

The quote below sums up Fergus’ attitude to the appalling hand of cards he has been dealt.

“Although not ideal, and not yet over, things are looking very positive.  It has been a testing experience, but the real gift is life – which I’m incredibly grateful for. I’m also grateful to have the tremendous support of my family, and of so many friends, work colleagues and extended family.”